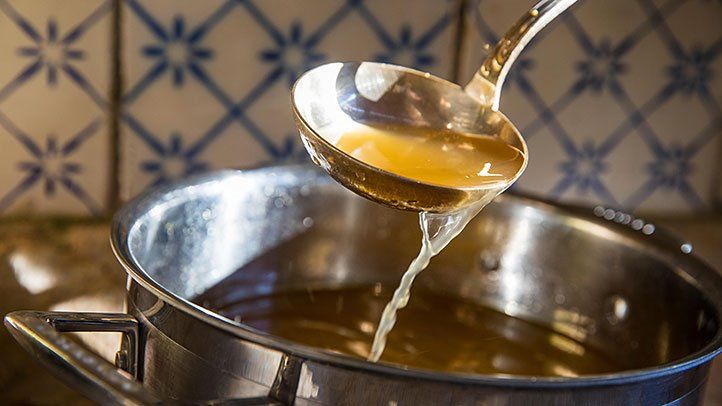 Whether you’re fully on board with the bone broth trend or still skeptical, there’s no denying its popularity. Serena Poon, a chef, nutritionist, and Reiki master based in Los Angeles, says that, although bone broth has been used in Chinese medicine for thousands of years, it wasn’t until a few years ago that the liquid developed a reputation for being a health and wellness superfood. The reason you’ve been hearing all about it recently can be attributed to the fact that it fits into two incredibly popular eating approaches: the ketogenic (keto) diet and the paleo diet.

Bone broth is technically a stock that’s made by simmering the bones of animals with vegetables, spices, and herbs for a long stretch of time, usually a day or two. Poon says that the resulting nutrient-packed liquid is rich in anti-inflammatory amino acids, bioavailable minerals, and collagen. Bone broth has been linked to a host of benefits, such as relieving joint pain and arthritis symptoms, strengthening bones, and promoting a healthy immune system and gut, according to Harvard Health Publishing.

It’s also said to improve skin quality because it is rich in collagen, which is a protein found in the skin that’s prized for its ability to promote elasticity and help the skin stay wrinkle-free and youthful, according to the Cleveland Clinic. Collagen production declines with age, accelerating around age 40, according to a study published in July 2014 in the Journal of Anatomy. The study reported that a 1-year-old had 85.77 percent of skin area occupied by collagen while a 49-year-old and 90-year-old had 72.45 percent and 56.63 percent, respectively.

That steady decline in collagen is why there’s an entire industry dedicated to how to get more of it, whether topically through anti-aging potions or by ingesting collagen powder, supplements, or drinks containing collagen, such as bone broth.

The thinking is by drinking collagen-rich bone broth, the collagen will then be fast-tracked to the face to combat wrinkles.

What Does Research Say About Potential Bone Broth Benefits?

It’s true that there is a strong gut-skin connection, and it’s something that’s being studied more and more, says Peyton Berookim, MD, a double board-certified gastroenterologist and internal medicine physician, and the director of the Gastroenterology Institute of Southern California in Beverly Hills. Food allergies, for instance, can manifest on the skin as a rash.

Unfortunately, though, there’s no way to designate which nutrients go where. “Just like eating fat doesn’t directly translate to body fat, as there are other factors involved, neither does eating collagen mean an increase in [collagen] levels,” says Isabel Butler, the company nutritionist for the app Spoon Guru.

RELATED: 10 Things Your Skin Is Trying to Tell You — and How to Respond

I tried several RSS feed generators and the one that worked best, aside from being the simplest, was RSS.app. It’s